It began with Westerly High School Class of 1971’s yearbook. Began with how old yearbooks depress me. Even current ones. (Yearbooks and the Macy’s Thanksgiving Day Parade. Don’t ask.) Anyway, those black and white photos of other human beings who considered themselves It. Off to take on the world! Our whole lives ahead forever and ever and ever and ever! Endless effing summer of being the envy of every old woman sniffing cantaloupes at Sandy’s Fruit Stand, of every old man walking into Danny’s for a beer after his softball game. Prom queens then, and prom queens now, class clowns then, and class clowns now. Don’t we all believe (and maybe dread and maybe celebrate) that we’ll always be The Generation? We don’t listen to graduation speeches but we know that, in essence, what the speakers are telling us is that we hold the future in our hands. We always knew this, of course,  and we are selfish with our birthright. We wouldn’t give it away to just any old Most Likely to Succeed to come along. And we look good all polished up for a studio portrait (most of us; again, don’t ask). This is the most important moment to us so far and we can’t imagine others quite so big. We picked out the right sweater, the initial pin clasp; we chose a quote that made us sound either philosophical or like the most inebriated member of our species. Aren’t we clever, we thought, or: Aren’t we sticking it to the man?

The yearbook started me thinking about the music of this generation or that. This reminded me of Mr. Brightside, that song by the Killers which is definitely NOT a song from my generation (I remember someone blasting Hotel California from a boombox powered with several D batteries in the back of the bus coming home from an away football game senior year; I remember kids in study hall (I remember study hall) fighting over the correct lyrics to Stayin’ Alive.) But when I tried to teach one poetry class how powerful disruptive rhyme schemes can be, I told them to listen to Mr. Brightside. Try, I said, to predict what the line that follows “And it’s making me sick.” See what unstated things a real poet can make you hear? I love this song even if it isn’t my generation and even if, had the wrong kid been sitting in that room, I could’ve been called to the principal’s office and subjected to a slightly embarrassing recap/justification of that particular lesson.

And this led me to think about Frankie Valli’s Swearin’ to God song. This is the kind of sugar pop I used to love much to the horror of friends with more discerning tastes (and, yes, Karen Denham, I still stand by my Fifth Dimension fandom). Every time it played on WABC AM radio, I cranked it up and sang along.

The song came out the same summer as Jaws. Remember that summer?

Aunt Rita dropped my cousin Rob off early for the matinee. He was always over when we were kids, but now that was changing, too. I was twelve. He was sixteen. Maybe he had his license, but that wouldn’t have mattered. Who would ever have let us drive a car anywhere? So we walked from the farm to the Jerry Lewis Twin Cinema on Granite Street on a brilliantly sunny day when we should have been at the beach (one last guileless trip before we realized what could happen in an idyllic summer town like ours). I had never been to a horror movie. My friends had wanted to sneak into the Exorcist, but I said, Count me out. I’ll never sleep another wink. Nightstalker paralyzed me, made me a statue in my bed convinced that if the sheets didn’t move, a vampire wouldn’t know I was in there. But there we were, my favorite person in the world at the time and me: on our way to see Jaws.

If it was Rob’s idea to go, I wouldn’t have said no. Especially that summer when the stuff we used to do was out of the question: picnics on Turkey Rock, playing Shoot in the hayloft, reclaiming abandoned calf sheds as our forts. Look at us, all grown up and off to buy a ticket to a scary movie right in the middle of the day! When we got to the theater there were other boys, too. His friends from his neighborhood, one of his Shea cousins. I sat on the end of the aisle, a little heartbroken, and then absorbed, completely transported by the terror that Jaws inspired in a generation that had no idea what special effects could achieve.

Once the movie ended, the sunshine outside the theater did nothing to assuage my terror. The older boys got a ride home. Rob and I walked back towards the farm, a route where great whites might be hiding behind the stone walls and hedges that used to line my street. I don’t remember if we talked about the movie, but I do know I told my mother every detail that night as she stood at the stove and I set the table: And then the head rolled out! And the leg — with his sneaker still in it! — hit the bottom of the ocean!

Every time I hear that Frankie Valli song (, it conjures the first scene of the movie. The naked scene I watched at the end of a row of adolescent boys, boys whose voices had changed, who could grow beards. That song plays and I am back in that theater, wishing Chrissie would stay at the damn party, wondering how I will survive the next two hours, gripping the one armrest I don’t have to share, hoping I can resist screaming.

Rob and I went bowling last summer and, four decades later, it was the kind of fun I remember. There is something of those children left in us, something, too, of those people we were all buffed up for the yearbook photographer. Once, Rob and I swam in a lake where we later learned someone had dumped a pet alligator that had outgrown their bathtub. The state itself was full of cottonmouths. No adults supervised us. We never touched bottom, only treaded water for hours, at the center of our universe, no worries about whatever shared space with us, the future rippling from our young bodies, outward like a song.

My father was fifty when I was born. His family had given up hope that he’d ever marry, the bachelor farmer who took most of his meals at the local diner and returned home to his cows. By the time he married my mother (who, coincidentally, worked at the diner he frequented so much) and had me, most of my Panciera cousins were already in high school. I spent my childhood, instead, with the cousins from my mother’s side of the family. We shared a history of family picnics where our fathers and uncles competed loudly at horseshoes, of Christmas Eves sitting at the foot of Nonnie’s bed and balancing our plates on our laps because it was the only room left in the tiny apartment, of the food our mothers were famous for: my mother’s meatballs, Aunt Rita’s hotdogs and peppers, Aunt Lee’s eggplant, Aunt Sandra’s baked beans, Aunt Nanny’s coleslaw, Aunt Laura’s Portuguese sweet bread. We knew that our grandmother always had flat orange soda that she called sodie in her refrigerator, that she was desperate for one of her granddaughters to marry one of the undertakers’ sons who were so nice to her when she went to every wake in town. We knew our grandfather drank too much, but that he also doled out the  Juicy Fruit gum he kept in the top drawer of his dresser.

My father’s parents, however, died before I was born. My knowledge of them and of the farm before I lived on it, was limited to what my father offered. Stupidly, I didn’t ask as many questions as I should have in part because I assumed I would never live anywhere else. But recently, my Panciera cousins have begun to fill me in in ways that I could never have anticipated.

Linda’s father was raised on the farm. His nickname, Boat, was written in the cement wall outside the milking parlor. My father had told me once, a long time ago, that his father had carved lions out of granite and that they kept guard at a cemetery tomb, but no experts on the history of Westerly granite had any record of them. I was told that Angelo Panciera had been a stonecutter not a stone carver. But Linda knew different and she showed me those lions in Riverbend Cemetery. I had passed them a hundred times before on my walks there but now when I do, I imagine my grandfather’s hands, the artistry he was capable of versus the nameless work he did to feed his family.

Marie’s grandparents bought our farm in 1911 with my grandparents. Two brothers had married two sisters and the families lived and worked together. Marie herself lived in her grandparents’ former apartment when her husband served in Vietnam. These days she lives in the house her father built, and when I saw her on Thanksgiving she said, “I have a mirror that used to hang on the farm. I’d really like you to have it.” I love this mirror, not for the reflection it tosses back at me as I stare into it, but for the idea that my father might have checked his young face in it, that my grandmother might have paused before it to pin up her hair before starting the day’s work. As I left Marie’s house, mirror under my arm, she asked if I would also like some of the nuts from the nut tree. I assumed she meant the tree in the back yard of my mother’s new house, but she meant the black walnut that had stood sentinel in one of our pastures. In a small plastic bag, there were the same nuts squirrels hoarded beneath the eaves in the attic. “I like to hear the mice in my own attic rolling them around every winter,” Marie said, and I knew, as perhaps only a cousin would, exactly what she meant.

My father died in 1991. Since then, I have run my fingers across the images that remain of him, more familiar to me now that the real lines of his face. 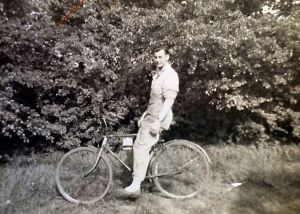 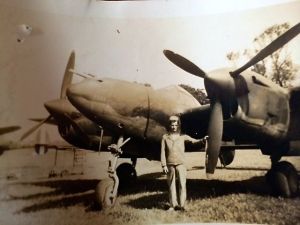 But it turns out, he wrote to his only (and adored) sister, Dolly, when he was stationed in England during World War II, and recently my cousin Carol brought us photographs he had sent, too. In one he stands beside one of the airplanes whose propellers he serviced; in another, he is astride a bicycle. A bicycle! It would not have surprised me more to see him waving from a hot air balloon or riding a camel through the Scottish highlands. On the back of the photos, in his crimped penmanship: A P38 with me in front of it; My bike and me. Just when you give up hope of having no more stories to smooth like stones in your memory’s pocket.

These things that I can touch — the tousled manes of the lions on guard, the oak frame of a real looking glass, my father’s young face so far away from the family he loved, are my favorite gifts of any season. I wish you all the same in this new year, that somewhere you have a loved one who has kept part of your history safe for you.