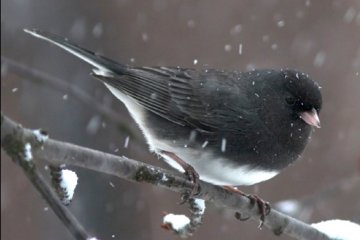 Dark eyed juncos. Those are my favorite birds this winter. They’re dressed right for the white background. They’re not really posing, in my heart of hearts I know this, but they do perch in the branches of some kind of shrub that has only red berries this time of year. This is the kind of calendar photo my friend Miriam would roll her eyes at, the kind where she would have to say to me: It’s a little cheesy, don’t you think? because, on my own, it would not occur to me. I like the Fifth Dimension, too. This makes my friend Karyn roll her eyes, but when “One Less Bell to Answer” plays at Market Basket — a much more rare occurrence than seeing one of ten thousand juncos at the feeder — I can’t help it: I sing.

I’m telling you this so I don’t discuss politics. I know you haven’t been sleeping at night so for your entertainment, I’m going to go on about the kinds of things that might induce drowsiness. Trust me. You are safe here.

In the mid-nineties, I had a student named Jennifer (I had several Jennifers then, sometimes in the same class; in my return to the classroom, I don’t think I’ve had any). This Jennifer sat in the back row and was a bright kid in a lovely but totally unmotivated class of seniors. She never asked why Shakespeare was written in Old English, for example. She volunteered to read poems aloud. She could correctly pronounce the word bosom. One day, I told the class that, if they were ever stranded on a tundra and could only eat polar bear, they should never eat the liver. Too much concentrated Vitamin A. Jennifer said, “Now I know why you remind me of Mr. Luther.” Mr. Luther was a beloved science teacher, iconic. I was still a young teacher unused to this kind of praise. I got that feeling peacocks must feel just before they flex that tail, but then Jennifer added: “You’re both so full of useless information. I mean that in a good way.”

For example, I’ve never forgotten the Islets of Langerhans from freshman biology class at Westerly High School. TWICE I’ve scored with that answer on a Jeopardy question. (On the other hand, in Pictionary, when I was asked to draw Europe, I put it slightly north and east of Maine. (And my partner guessed it immediately.))

While we’re on the subject of high school. Turns out, you never do need to know anything about trigonometry to make a go of it in life.

Dogs in TJ Maxx. Dogs sitting behind me in a basketball game. In Paris in 1992 (here, if I sound like a world traveler, you must accept that as an alternative fact), dogs went to cafes where, at least, they breathed cleaner air than those of us head-level with the mushroom clouds of cigarette smoke. But I remember thinking: ew. I grew up on a farm where animals were, you know, animals. Dogs in restaurants, especially in places with no real pooper scooper laws? This was a cultural leap for which I was unprepared.

But now, stateside, I’ve stood in line at cafes with dogs. They’ve run over my carefully unpacked picnic at the outdoor jazz concert on the Rowley Common. They’ve burst into my house, dashed up my stairs, scarfed down the catfood and torn out my screens. They’ve ridden around in carts someone is going to put clothes (maybe even food) into later. And everyone, everyone who considers themselves a dog lover, now considers me intolerant. I prefer to think my tolerance has limits. I have dogs. I’ve seen what they eat and what they lick. I’ve seen what they do when they have problems with their anal glands. They have anal glands. However, today, for example, when I’m done with this, I am going to bring them to the beach and let them chase the waves and then they are getting baths at the dogwash. On the way home, we are stopping to buy marrow bones and their organic, grain free food. But tomorrow, when I go to CVS to buy toothpaste or to the 99 with my mother (she calls it the 99 House), Bella and Izzy will be left home on their brand new dog bed that I am buying today at TJ Maxx also without them. 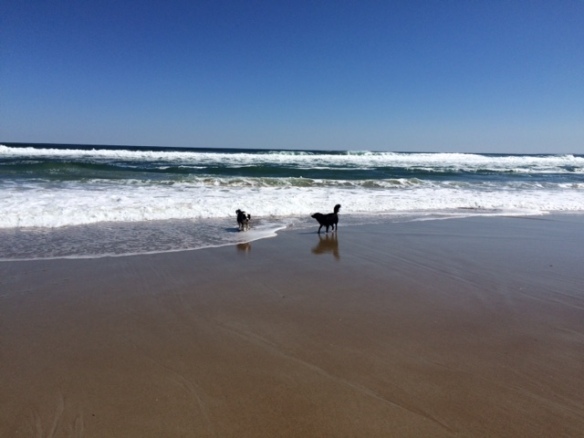 Just to be clear: This photo is not from today, but these are my dogs and this is where we’re headed.

If, however, my cats would travel, I would strap on the Babybjorn and be off to Symphony Hall, Restaurant Week, and Nordstrom’s.

Last thing: Today on my walk, I saw three deer at the edge of the woods. When they saw me, they leapt through the snow. Deer leaping through the snow. Made me hum a little “Stoned Cold Picnic” all the way home.

7 thoughts on “Surry on Down”