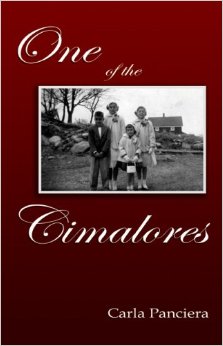 The Cider Press Review has recently announced the winner of its 2015 Book Award. More than ten years ago, my book, One of the Cimalores, won their inaugural prize. I wish Julia Bouwsma success with her award winning manuscript and the kind of dream-come-true stuff that happened to me all those years ago.

This entry is the first in a series.

In the Westerly Public Library, fiction shelves sat on a glass floor accessed by a metal staircase that broadcast footsteps. As my friends chattered below, chemistry notebooks, encyclopedias fanned before them, I browsed the dull-spined books. Slats of fluorescent lights glowing from the reference desk shone through the cubes at my feet. I trolled the P’s. P, Pa, Pan, until I found it: the place my book would rest someday. I pushed aside its neighbors, reserved a slit wide as my finger. Then I returned to my friends who thought I’d been scouting titles for our report on catalysts.

What do you want to be when you grow up? people asked. New people in my life, people just passing through my mother’s kitchen, adults who knew little else to ask small children. Some days I told them I wanted to be a dairy farmer like my father.

“Pick something easier,” my mother said.

“Pick something where you’ll make some money,” my father said.

So, other days, I said a writer. Then the person bending towards me trying to get me to speak, (I would have been called, then coaxed, then ordered, out of my room to meet guests) would wonder what I would write.

“Now that’s a good idea,” my father said. “You write a book, make a million dollars and we can sell this place. Then your Daddy can take a rest.”

This appealed to me: making money. Also, having my father in the house on cold nights, snow pinging off the windows, wind shearing shingles off the barns, instead of outside soldering busted pipes or delivering still born calves into a bitter season. I liked the idea, too, of becoming famous, signing my autograph, having my picture taken for newspapers. She used to be so shy, people would say.

In college, I struggled with fiction classes, agonized over stories that weren’t stories at all but pages and pages of description. Finally, a friend who witnessed me jamming yet another page one into my typewriter and kneading my forehead as I stared at it, suggested I try a poetry course.

When Mekeel McBride walked, bells on her cloth bag jangled. She entered the room in broom skirt, poncho, crimped hair frizzing around her face. In the margins of our drafts, she printed encouragements with purple markers, letters as fancy as artwork. We sat around a large table and read drafts aloud, Mekeel leaning forward, beaming, no matter what garbage we produced.

Though it turns out, I could write poetry. I had no idea how to do it and Mekeel offered little or no instruction, only praise and encouragement, but my friend was right, I enjoyed class. I felt free. And something was working. Even the crusty graduate students in our workshop offered praise. It didn’t matter, though, I thought. This isn’t really what I do.

After several of my poems appeared in the campus literary journal, someone referred to me as a poet. I studied myself in the mirror: my hair short as a boy’s, my earrings garnet studs I’d had since my eleventh birthday. My wardrobe consisted of Levi jeans and button down oxford shirts, sneakers and one pair of LL Bean duck boots. I didn’t carry a purse, just a wallet flat as a man’s in my back pocket. I desired nothing more than to blend in, to walk from one part of campus to another without anyone glancing my way. The way it was, say, with fiction writers.

Three years later, in graduate school, the creative writing students gathered at The Castle, a gloomy basement bar off Boston’s Commonwealth Ave. My fellow poets crammed chairs around two tables, ordered wine and recited poems, dropped literary allusions, compared one person’s translation of Ovid to another. I’d spent a month listening to these kinds of conversations. Conversations in which I was not smart enough to participate. I’d made a mistake both in coming to Boston University and in pursuing poetry. Poets were either free spirits draped in tinkling bells or erudite scholars who communed regularly with the dead.

I felt nauseous, homesick, though I lived a half hour away and could leave any time. I moved to the bar and ordered a beer.

A fiction writer named Otto introduced himself. “What are they doing over there?” he asked.

“Talking Ovid,” I said, shrugged, vowing not to cry.

Otto pulled the stool out beside him and I sat. We clinked glasses. “Fuck Ovid,” he said.

I finished graduate school, completing an embarrassing collection of poetry, and refused to fool around anymore. I courted solely the fiction muse, except when I got a teaching job and wrote with my high school students. Only then did I sit in the discussion circle and play along with them, trying out in-class exercises to produce poems.

“Stay loose,” I told them, “have fun with words.” As if I believed it possible.

After ten years, though I loved my profession, I left my classroom to stay home with our first daughter. I missed teaching, but I reasoned that, if I couldn’t teach right now, I should write. Every day. Something I’d never been able to do. I used my daughter’s nap time, rose at dawn before she awoke. I hung posters in local libraries inviting fiction writers to form a group. As I toiled away at my true love, I sent off the poems I’d written with my students. Two got accepted one day, two more the next.

“I guess it’s not a fluke,” my husband Dennis said, staring at the second editor’s letter.

I had no choice but to return to poetry, but only as a diversion when I needed a break from fiction. We had a second daughter and a third. We lived in an old farmhouse, much like the one I’d grown up in, a fixer-upper with a huge lawn to tend. Dennis and I traded books; my writing group met weekly; I published poetry, memoirs about the farm, even a few short stories.

For my fortieth birthday, we celebrated with a small group of friends around our table, lit candles and drank wine. A lot of wine. Our daughters watched a movie, came in for cake before Dennis put them to bed. Upstairs they brushed teeth, sang Good Night, Irene loud enough for my mother to hear them a hundred plus miles away. Candlelight softened the faces of the people to whom I felt closest.

Here is my life so far, I thought. A good life.

Forgetting, the way I mostly forgot, that what I had wanted longer than I had wanted anything else was to write a book.

3 thoughts on “One of the Cimalores Might Be a Poet: Part I”