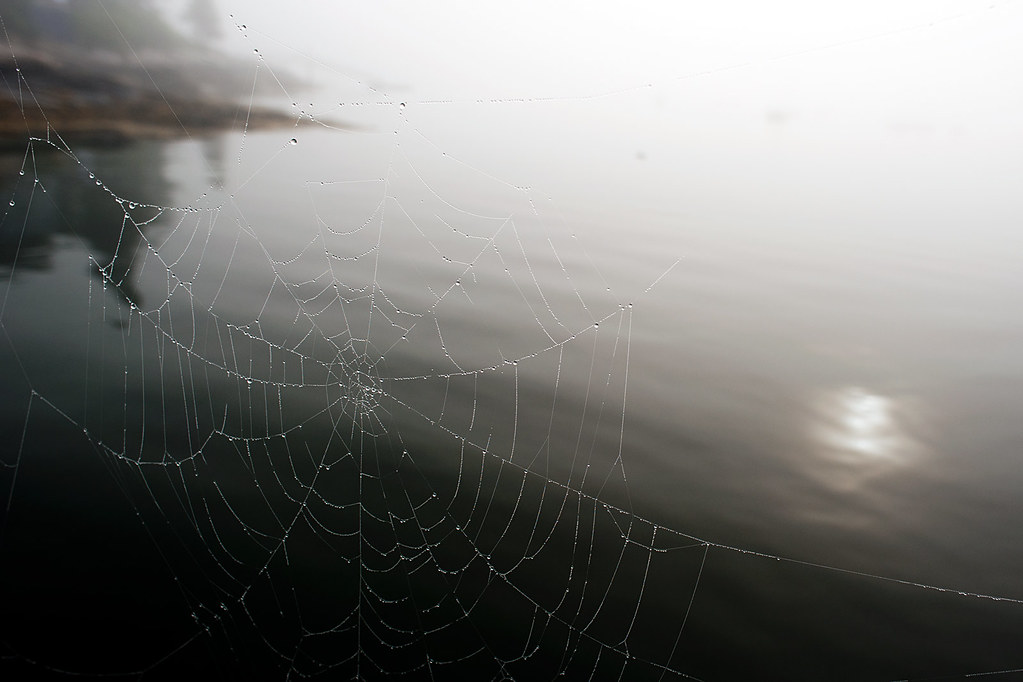 Webs. Everywhere along the dock. Elaborate, fantastic, larger than large hands unfurled. Sunset and I’m trying not to think of the spiders who made these, who might, as we sit admiring the colors, cloud formations, be waiting beneath us, who might be looking for a way back into the fading light. I’m listening to my friends, but I’m watching the webs. One spider appears, repairing the day’s damage before the night’s insects arrive. A healthy specimen, not the pale dust spiders I’ve learned to share my space with, but not the enormous dock spider I feared, either. Conversation continues. I sip my Magic Hat. Colors change, deepen. Ospreys hunt and so absorb me that, by the time I check again, every web is busy with spiders preparing for their evening meal. The dock narrows; the sky darkens. Time to leave, I say, meaning: time to leave this space to them.

We move to the outside deck and, as we open the sliding door, an even larger spider scurries in and loses itself in the dark space behind a wood stove. Someone tries to catch it and free it, but it is gone, and really, truly, not gone at all. I hear what I’ve always heard: spiders do good work; spiders won’t hurt you; spiders are more afraid of you than you are of them. Oh, Logic, you are lost on me. My fear distracts me the rest of the weekend. Despite that I am surrounded by three of my closest friends for a rare weekend together, I am always wondering where that giant arachnid is lurking.

My husband, Dennis, has been extolling the benefits of spiders for years now, usually as he is ushering one of them out of our house and back outside per my request, while I watch from a few feet away to make sure he is not lying when he says it’s gone. He also tells me that certain people and certain things are put in my way intentionally. That they will become obstacles until I learn how to accept them. And I have learned to accept many spiders, most of those I encounter anyway. I also have a snake-y yard, live with the knowledge (and the shed skins) that snakes winter in my basement. Beetles, I love. Moths (except my arch nemesis the pantry moth), worms, many creatures fascinate me. But a large spider defeats any evidence of my evolving tolerance.

So do some people.

I have to say it: that there are those (few) people who, just as that giant brown arachnid scuttled into my perfect weekend, creep into my life and undo some serious work. I’ve saved the vitriolic emails from one of them under the title: Shit I Don’t Get Paid Enough to Deal With. I’ve researched ways to block people’s Facebook posts and Goodreads updates so that they won’t be able to confirm what they might already suspect: I don’t really want to be their friend. I have (and here I’ll use the word as it is intended) LITERALLY crossed the street to avoid passing too closely to the obstacle who lives next door and frequently shows up on MY walking route.

My husband, Zen master, says to be thankful for these people who remind me to be empathetic (necessary prompting for me, I admit), to be tolerant (ditto), to understand that the universe is not laid out for my ease and amusement. I say, “Can’t you just wrap them up in a piece of toilet paper, open the screen, and set them outside the way you do with spiders?”

This weekend, we played Cards Against Humanity (I took a seat that afforded me a view of the corner into which the spider had hidden itself), and I thought: if I was a heroin addict, this would be like bellying up to a large vat of the poison. I didn’t win, in part because other players, overdosing on the disgusting suggestions, often opted for the tamest (rhymes with lamest) responses. Those people? Those who matched Alternative medicine has just embraced the healing powers of ___ with Saying I love you, they’re put in my path, too. Thank god.

So I came home, inspired to continue working on being a better person. I started (small) by taking my hot and bored dogs for a swim. I’ve ignored them recently, busy as I’ve been avoiding certain people. When I have a nastier impulse, I ask myself: What would someone who was excited to get the Cuddling card in Cards Against Humanity do?

My metamorphosis is far from complete, of course. For example, the very first thing I did when I walked in the door? I unpacked my suitcase directly into the washing machine without touching any clothes into whose folds a spider might have traveled, knowing full well, no creature could survive a wash cycle.