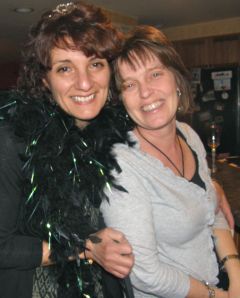 November 3, 2004 was not my favorite day in history. My own history or my country’s. I dropped my two youngest daughters off at pre-school and started the walk home, where, I was pretty sure, my electrician would be wiring my kitchen and sporting a Bush Cheney hat just in case I forgot the previous night’s election results. We had been living on our porch since the past spring while we re-built our kitchen. Most recently, my kids wore mittens to eat their toast, but I considered it: stopping the work that would finally give our new space light in exchange for a sight less nauseating than that blankety-blank hat.

It was a beautiful day, too, torturously so, as I strolled along a street in one of Massachusetts’ only red counties feeling more alone that I had felt in the nine years since we’d moved here. And that was saying something since I had no friends in town and spent most days re-filling juice cups (once I moved the sofa out of the way and discovered them and their solidified contents behind it) and helping our three little girls into and out of costumes. My friends lived closer to Boston and most of them worked full time. My own family was over two hours away. So the sun was shining, so what? So I love the gray scale of November with the weird kind of devotion leaf peepers feel for peak foliage season and beach bums love July? This was one lonely planet and, at one of its ends, my electrician would be mercilessly whistling through his day.

And then, in the midst of my misery, I heard a voice behind me: “Bad day, huh?” For many years of my own childhood, I had an imaginary friend. Briefly, I considered that she might have returned (and I was shamelessly psyched), but when I turned, I saw Anne who had just dropped her twins off at pre-school as well. Maybe she was the person whose car had the Bush bumper sticker and was here to gloat. This thought made me want to turn and flee, but, no. She looked as heartbroken as I felt. Maybe, I thought, we won’t have to move to Toronto to live with my brother after all. And that is how it began: Another of my life’s great love stories.

There are many reasons that, ten years later, I owe George W. this weird debt of gratitude. For example, Anne is (like so many of the liberals I know!), a great dancer. This trait cannot be underestimated in one’s friends. She will, when no rentals exist, strap a canoe to the roofrack of her minivan, bungee cord a kayak into my minivan, and refuse help from any men in the parking lot of the public boat launch. Rain, snow, sub-zero windchills, will not keep her from her morning walk which means I will not be allowed to skip walking, either. She rarely refuses to meet me for a drink, but I don’t often get the chance to invite her because she invites me first.

So, yes, it’s fun to be with her. I have never lived this close to a friend (I grew up on a farm tucked away on its own 100 acres, my nearest neighbors 225 Holsteins who weren’t so fun on the dancefloor). But she is much more than a friend. She is a sister-wife and here’s what the best sister wives can do: they can help you raise your children; they can loan you their own. Who else would I list as my first emergency contact but the woman whose door my children don’t have to knock on? She knows who eats peanut butter and who is desperate for meat outside our vegetarian home. She doesn’t have to ask when their birthdays are, what they might like as gifts, if she her family are invited for cake. She takes their beloved Nana to her favorite place in the world: Market Basket and then out to lunch (though it means giving up her one day a week that is hers and hers alone). We’ve carpooled to gymnastics, soccer games, cross country meets, parent-teacher nights, Trader Joe’s, worked the PTA’s popcorn machine for five record-setting years, perfected packing for beach days and outdoor concerts. We are not afraid of each other’s unpredictable dogs. When Beatrice ended up in the hospital for six days and I forgot I had two other children, Anne didn’t. They were fed, dressed, their laundry done, their backpacks stuffed, by the only person who could step in without texting me and asking: how does this go here? (And, even after she looked in my closets, she did not abandon me).

Four years after we met, Anne and I did get to dance together at Obama’s inaugural ball sponsored by Rowley’s Democratic Committee (?!?!!!!) which inspired great joy in both of us. Now, when we head out for our three mile trek, we trade stories of our teenagers and, just as it was when our issues were head lice, Invention Convention, the fifth grade environmental camp fundraising overkill, we understand: I am not alone here. In the midst of the red that surrounds me, I have found a true blue friend.

4 thoughts on “How I Met My Sister Wife”